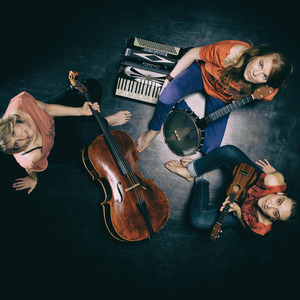 East European song and light up the stage with rompin’ stompin' body percussion and warm wit. Expect magnificent, hair-raising performances – music that mourns and dances at the same time. Called "fascinating and multi-lingual" by the LA Times, "Persuasive, nearperfect musicians" by Herald Times, “gritty and ethereal, banjo to Bartók.”

Imagine a global choir. More than two hundred voices, spread across the world and all coming together to sing without even leaving their homes. It’s a wonder of technology, but it’s also an act of community. And it’s what moira smiley & VOCO have created on their new album,Laughter Out of Tears (released September 15, 2014 on Whim Records), pulling together people from Australia, Europe, and all throughout North America to become the “Choir of YOU” on the record.

“I’ve had the Choir of YOU idea for a while,” Smiley explains, “but it seemed so appropriate for this album for a few reasons: My father died in 2012, I was feeling lost artistically, and communal singing was always a source of strength – a root for me. I write for choirs, and I know how powerful a gathering of voices can be. The Choir of YOU was a perfect way to bring myself ‘home’ again.”

Laughter Out of Tears continues a journey Smiley has begun with VOCO’s three previous releases, combining polyphonic songwriting with European and Appalachian folk song. There’s also a strong difference – this album is far more personal - with tracks flowing from one into the next, and Smiley's originals explicitly telling her recent journey through grief.

“It’s about moving out of sorrow into a place of joy, of laughter,” Smiley says. “My songwriting here is far more modern 'troubadour' than on any of the previous VOCO albums. It feels softer, more intimate – more folky. There’s much more of me at my most tender in here.”

The inspiring power of the Choir of YOU blossoms on five tracks ofLaughter Out of Tears, from Smiley’s own love-song to her northern, mountain roots in "North Country" to her take on Robert Johnson's inimitable "They're Red Hot".

Gathering so many people was surprisingly easy; she was overwhelmed with mp3s.  “People could download the tracks from my website, add their own voice by following the guide-tracks and sheet-music I posted there, then email their tracks to me.  Easy!” she says. “Really, it was only the mixing that was tricky; that took several days to complete – but was one of the highlights of my year.”

Working with voices has always been Smiley’s joy.   A virtuosic singer, she works with artists as varied as Paul Hillier, Ladysmith Black Mambazo, KITKA, Tim O’Brien, Solas and tUnE-yArDs, and has sung everything from Stockhausen and Stravinsky to traditional folk music – which remains her deepest love, to the level that she’s spent time as a song collector in the Balkans. She’s recorded Irish sean-nós on her solo record Rua, been featured on radio, television and films, taught at the University of Birmingham in England and several American universities, and been the recipient of an enviable list of grants and awards.

In 2006 Smiley formed VOCO, a five-piece group of singers and players, with an improvisational - and uniquely vocal - approach to American Eastern European folk music, and Smiley’s polyphonic originals.

“The band is made up of spare ingredients,” she says. “There’s usually cello, always body percussion, and everyone sings, of course. I write for three or four voices in harmony, and I play banjo and accordion.”

And the communal singing that swells the disc is also very much part of who Smiley is. But she hadn’t realized to quite what extent it was until she was working on Laughter Out of Tears.

“I feel I really get it now. There’s a feeling of being given a gift when you sing with others.  Hearing the Choir of YOU on the record truly did feel like a home-coming. Working with other people like this makes me feel more committed to all the traveling, and live performance that I do.”

“I feel proud of the songwriting too,” she observes. “Songs like “Mazurka,” “Oh Winter” and “North Country” don’t shy away from personal storytelling. To me, they’re the heart of the album.”

It’s a disc that showcases both the personal and communal, and the delicate balance between the two. As well as a memorial to the father whose tenor voice was Smiley’s first guide into vocal harmony, the music encapsulates the vulnerable and playful sides of her personality, a journey from the night of sadness into the light of pleasure.

And in doing it she’s been able to let her own voice ring out, going from the sorrowful, confessional ache of Gillian Welch’s “Orphan Girl” to the unfettered enjoyment that runs through “Steam Engines” and “They’re Red Hot.”

It’s an album filled with release, a celebration and testament. But it also builds on everything that Smiley has done musically, forging something new and cohesive from all those scattered elements.

“I have a burning desire to do anything surprising, interesting, and challenging,” she says. And with Laughter Out of Tears, whether singing with VOCO or Choir of YOU, Moira Smiley has achieved all that